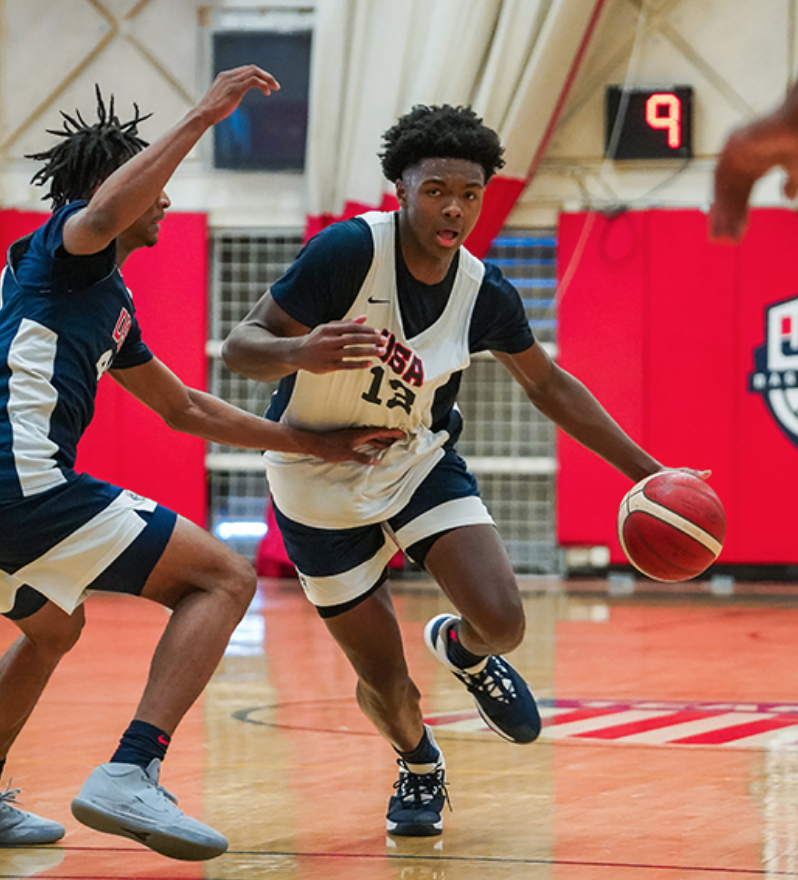 Harrison Ingram is a little flash, he is tough, he is relentless, he is all around effort and talent. Texas breeds another impressive player.

Ingram plays for St. Marks high school in Dallas, Texas and he has set the basketball court on fire against some of the best. He is a 6-6, 210 five-star small forward ranked as the 17th best prospect, 6th best small forward and number one ranked prospect in Texas for the 2021 basketball class by 247 sports composite. His game has some Paul Pierce, Joe Dumars and James Harden in it. Ingram talked with me about his recruitment, would he be a one and done or take the NBA G-League route? Here’s our interview for the NBA Draft Room 5-Star Corner:

LJ: You display a great arsenal of offensive moves. How much time off the court do you spend on your game?
Harrison: I spend a lot of time off the court on my game. From workouts with my trainer to shooting around by myself I get in the gym usually twice a day. Much more on the weekend.

LJ: You had a great game against the number one prospect in high school Jalen Green. Who is the toughest prospect you have faced? What were your stats?
Harrison: The toughest prospect I’ve ever faced by rankings is Jalen Green and Cade Cunningham but to guard was definitely RJ Hampton. I’ve known him for a while but he was just so quick and relentless toward the basket it was hard to stop him. I finished with 22 points 11 rebounds 7 assists.

LJ: You are one of the hottest recruits in the country so let’s get down to it. What schools are prioritizing you?
Harrison: I don’t want to get too specific but there is about 14 different schools all prioritizing me in my recruitment and I will be cutting a list down to about 5-10 sometime in May.

LJ: What school at this time you say has done the best job or has recruited you the hardest?
Harrison: I haven’t received as much love from any school like I have from Purdue. The entire coaching staff, the current players, former players, fans etc. I’ve never felt so wanted and needed by a program like they’ve made me feel.

LJ: Great season you had for St. Marks. What were your stats this past season?
Harrison: I finished with 20 ppg, 12 RPG, 7apg and a state championship.

LJ: I see a couple of NBA stars in your game. What player do you model your game after?
Harrison: I watch a lot of Luka Doncic and LeBron James film because I play a similar game to them in that I like to get my teammates involved and make them look better while also being able to score at will.

LJ: What type of impact would you bring to an NBA team?
Harrison: I would bring a variety of impacts to an NBA team. Most people would say I have no real weakness, and my versatility and play-making is the best part of my game. I would be able to run 1-4 on offense and guard 1-4 on the floor. They can use me as a shooter but I’m best with the ball in my hand making plays for not only myself, but also others.

LJ: A new barrier was broke and prospects can go to the NBA G-League for over the NBA G-league minimum of 250,000, now you can receive up to 500,000. Would that be an option you would consider? If so, would either price matter?
Harrison: It would definitely be an option I would consider just because I’m an advocate for the players that need to be paid by the NCAA for all the money we make for them. If the G League made me an offer I would consider it among other options.

LJ: Do you consider yourself one and done if you go to college?
Harrison: I would like to say I am, but nothing is promised. One and done is my goal but I know I need to keep working to stay on top and achieve this.

LJ: Texas has some absolute ballers from RJ Hampton to the Tyrese Maxey. How tough is the competition in the state of Texas?
Harrison: The competition in Texas is the BEST in the nation. There are so many underrated kids who are really good and many players are late bloomers. But the size and dog mentality down here in Texas is unmatched by any other state in America.

LJ: Tell me about the city of Dallas. How is it growing up in Dallas?
Harrison: I grew up in Colleyville which is a suburb of Dallas and it was nice. Quiet area with a bunch of kids my age who are all friends together. I moved to Dallas a few years ago and it’s very different but I like it. My school is in Dallas so it’s nice being out here close to my school near all my friends’ school.

LJ: Its some important fan bases that want to know what you think about their program. Describe what stands out about these programs and do you plan a virtual visit soon?
Harrison:
Memphis: Definitely the opportunity to play for an amazing coaching staff headlined by Penny Hardaway who can show me the pathway that he took to get to the league. Also, the fan base is amazing and my grandparents live in Memphis so that is also A +. They would be able to come to see all the home games!

Arkansas: The fan base is incredible and I have a lot of connections to Arkansas. Coach Cory Williams is the first college coach I ever knew back in 7th grade, at Stetson I’ve known Mason Jones since I was little because he played AAU with my brother and Coach Musselman’s nephew goes to my school and I know him fairly well.

North Carolina: The visit was crazy! They invited me up for the game against Duke and I’ve never seen an arena so loud and crazy and they had me with courtside seats. Coach Roy Williams is a legendary coach and I would love to play for him.

LJ: Back in September you took a visit to Stanford and in March you took a visit to Texas Tech. How were those visits? What do you like about both programs?
Harrison: The Stanford visit was nice! Best campus I’ve ever seen and love their plan for me. Since it was in the fall, I was able to play pickup with the players and with KZ and that was a good opportunity. As far as Tech, I actually canceled my visit due to personal reasons.

LJ: Do you have a dream offer?
Harrison: I cheered for Duke heavily when I was younger, but ever since middle school, I haven’t had any dream school. My dream school is the school that wants and needs me the most and has a great plan for my athletic dreams as well as educational.

LJ: Are you close to a commitment?
Harrison: Not really, a lot of new schools getting involved so a decision might not be made for a while, but then again if I do feel ready I will pull the trigger.

LJ: What about your game helps you make an impact?
Harrison: My best attribute is play-making for myself and others. I love passing the ball and feel I cannot be stopped one on one, so you have to pick your poison. Either let me go one on one all game or leave my teammates open and allow me to make the right play.