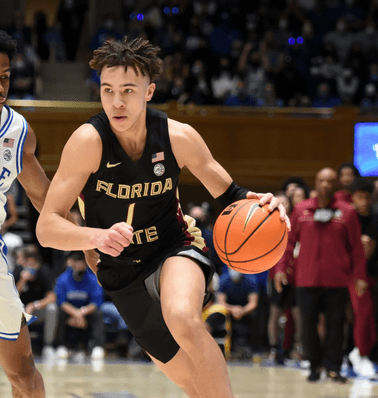 We all know the big names at the top of the 2023 draft class: Wemby, Scoot, Whitehead etc.but in this post I want to highlight a few names that don’t show up in most early 2023 mock drafts but who deserve to start getting some recognition and should be on your watch list.

Jalen Warley – PG – Florida State – Warley is one of my favorite under the radar prospects. The 6-6 sophomore didn’t get huge minutes last year as a freshman and he’s not terribly flashy when he is on the court but you can see the upside in the way he moves, his size for position and his poise with the ball in his hands. He’s an excellent passer with an advanced feel for the game and he’s also a really good defender who should be a real plus on that side of the ball by the time he’s ready for the draft (possibly as early as 2023 or next year in 2024). Shooting the ball better from outside will be his biggest opportunity/area of improvement. As a freshman he shot just 30% from 3 and only 33% from the field (on limited attempts) and so has work to do to round out that area of his game. His 67% from the FT line is also an indicator of the need for improvement as a shooter. But even with these flaws in his game he’s got clear NBA tools. Big ball-handling, instinctual passers like Warley are in demand and he’s in line for a big second season with the Seminoles. Time to buy some Warley draft stock.

Puff Johnson – SF – North Carolina – Puff had a bit of a coming out party this past March but is still overshadowed by Caleb Love, Armando Bacot and some of the other solid vets and high profile freshman on the Tar Heels. The younger brother of Suns forward and former lottery pick Cam Johnson, Puff is a talented 6-7 small forward who shoots the ball well from the perimeter, has good size and a solid frame and is starting to develop a good scoring instinct – becoming more than just a knockdown shooter. He’s a role player, not a star, but plays a valuable role as a floor-spacing 3&D forward.

Jamarion Sharpe – C – Western Kentucky – It’s not everyday you see a 7-foot 5-inch center fly under the radar but if you play in JUCO and then at Western Kentucky that can happen. Jamarion Sharpe does show up on some mocks and certainly has the attention of NBA scouts but deserves to get a lot more buzz this season. We’ve seen other 7-5 players come onto the draft radar in recent years but all of them were plodding centers that didn’t’ move well and would have been hopelessly over-matched against NBA speed. Sharpe appears to have the mobility and footwork/agility to potentially hold is own. In his first year at Western Kentucky, he shot over 72% from the floor and blocked 4.6 shots per game. Look for him to have a monster season in 22/23.

Tyrece Radford – PG/SG – Texas A&M – Radford is a defensive minded 6-2 guard who defends all over the court, is a high level rebounder and an outstanding overall athlete. He’s got broad shoulders and good strength, excellent quickness and good instincts. He might not be the ideal modern NBA guard since he’s more like a 6-2 defensive-minded shooting guard (think: poor man’s Marcus Smart) but he’s the type of high-energy glue-guy that contributes to winning basketball. He upped his 3pt percentage to over 40% this past season (on fairly low volume) and could continue to make strides with his offensive game going into his senior season. If he can develop some point guard abilities and learn to run an offense, he could potentially find a spot in the league.

Colby Jones – SF – Xavier – Jones is a well-built, broad-shouldered and athletic forward who is primed for a big junior season. As a sophomore Jones showed a lot of glimpses and caught scouts’ attention and put himself on the draft radar. He’s a high energy player who crashes the boards, flies up and down the floor and is a versatile defender. If he can take the next step as a shooter and stretch the floor better the rest of his game will open up even more. He’s got the athleticism to excel at the highest level and his skill-set is starting to emerge.

Mark Armstrong – PG – Villanova – I currently have Armstrong mocked in the 2024 mock but there’s a chance he blows up during his freshman season and is a one and done. He’s a sturdy, strong and aggressive lead guard who is a gamer with an aggressive and intense play-style. He’ll get every opportunity to make an impact on this year’s Villanova team so don’t be surprised to see his name rise up the draft rankings as the season progresses. NBA scouts will be very focused on Villanova this year, with Cam Whitmore likely to be drafted in the top 10, and so Mark Armstrong will have a chance to make a big impression.

Mouhamed Gueye – PF – Washington State – I was way too high on Gueye last year, seeing him as a potential one and done – and I might still be too bullish on his stock, but he’s got great tools to work with and is the type of high upside developmental player that could get looks in the late first or second round of the draft. Gueye tested the draft waters last year and made a wise decision to return to school and hone his craft. He’s still a raw talent and could use a lot of development time but look for him to take a big leap this year and (hopefully) show why I was so high on his draft stock a year ago.