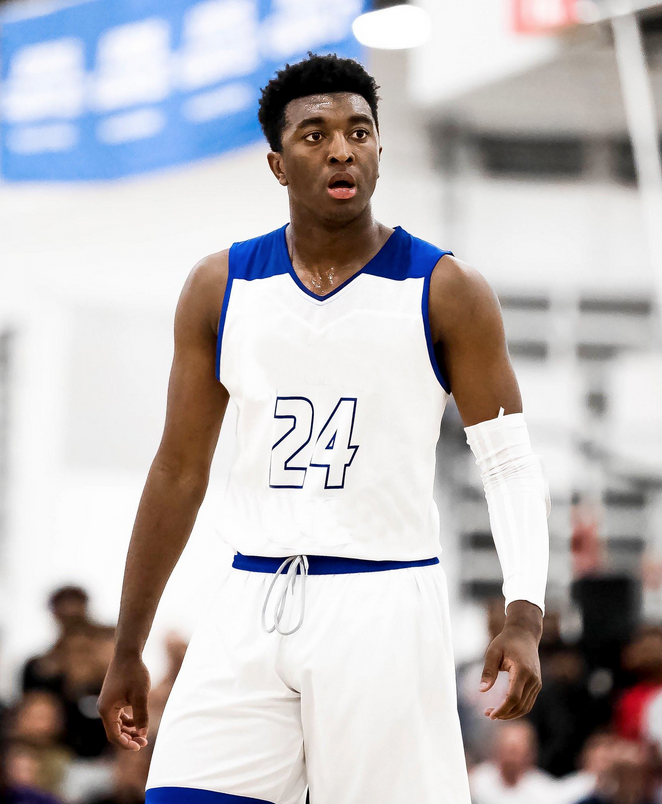 Kyree Walker is a prospect of many talents. Any championship team on any level of ball needs a prime-time player like Kyree Walker. His recruitment coming out of high school was a roller coaster ride. On June 30th 2017, he stayed home and committed to Arizona State but on October 21st 2018 he de-committed. Some of the top programs stayed in hot pursuit of the high four-star talent but ultimately he decided to forgo college to train for the NBA draft.

He has strong family support and works extra hard at his game. Walker was one of the best all-around players in the country regardless of class. His first 55 high school games with Hillcrest Prep he averaged 27.2 points 9.7 rebounds and 7.2 assists 3.0 steals and 2.3 blocks 1.3 turnovers. He shot 52% from the field, 45% from long range, and 80% from the free throw line.

Walker was considered a certified four-star by ESPN, Rivals and 247 sports. The type of talent he brings to the court reminds me of James Harden. On April 20, 2020 he chose to follow his dreams and make the most important decision of his life and declare for the 2021 NBA draft. This draft is one of the most loaded in years and he is one of those special talents. He talked about his decision, family, his recruitment and what he would bring to an NBA team:

Leader: Very impressed by the dedication a father has to a son. Your father has that for you. Explain what your father means to you and what he has taught you and how he has helped you prepare for this special moment?

Kyree: My father means the World to me. We been in the game for 10 years strong, and it’s been fun every time we done it. He taught me a lot. We always find something new to make me a better person on and off the court.

Leader: You have developed and improved in so many ways on the court. Tell me what you have improved in the most that makes you an impact player and ready for the NBA?

Kyree: My body and my jump shot. Those things I would say that improved so much. Got more athletic getting my body into shape. My Motor, I’m willing to do anything for the team. Any position they put me in I’ll be ready.

Leader: What’s your height and weight now? Do you think you are stronger than you were a year ago?

Kyree: 6’7 216lb I totally think that I am way stronger than I was a year ago

Leader: Your energy is felt on the court you can make people better just by the way you communicate. What makes you impact as a teammate? What will coaches love about your character?

Kyree: I love to learn. I’m willing to help my teammates see things that they ain’t see at my position before. A cut or a back door something little. I’m very coachable person. I work hard and hard work don’t go unnoticed. I’m just a team player. I will get excited for anything my teammates do.

Leader: What made you skip college to prepare for the pro route?

Kyree: My body was the biggest issue. I had to get my body ready for the next level, and mentally be locked in.

Leader: I kept a heavy eye on your recruitment. Talked with your dad and other programs about you. How hard is it to be one of the top guys in the country and how hard was it to make your decision?

Leader: Name your top three schools and what program would have been your choice and why?

Memphis was a second home to me. Being from Atlanta and me also playing for the Memphis War Eagles when I was younger it was just somewhere I could feel like home. Coach Penny Hardaway is a player’s coach so he knows the game and what it takes.

Arkansas is a great environment. I was watching the games and the hype they had was crazy and of course the coaching staff was amazing. And coach Musselman letting his guy’s hoop was a big thing.

Kansas, the relationship I had with Kansas was good. I talked to coach Bill Self and he gave me my offer and that was kind of a school I wanted so bad to have on my list.

Leader: Who kept in contact and recruited you the hardest?

Leader: What would you bring to an NBA team immediately? What makes you able to impact an NBA team right away?

Kyree: I’m an Energy person. I will bring energy from the jump. My motor, I’ll do whatever it takes to win. Put me in any position I’ll make plays.

Kyree: That’s my Rock. She keeps me going hard. She keeps my mental sharp. Without her I wouldn’t be as calm as I am. My mind would be all over the place but she has made sure it’s not.

Leader: Any shoe deals on the table? Who is talking to you?

Kyree: As right now probably a few but I’m still wearing all brands at the moment.

Leader: You had classic battles in high school with future NBA players. Who was the toughest player you have ever played? What were your best stats against that player?

Kyree: Zion Williamson is probably the hardest. I think I had another 26 or 27 can’t really remember. Made a second half stretch.

Leader: If you could choose which NBA team to play for who would you want to play for?

Kyree: I’ll be blessed for the opportunity that anyone gives me.

Leader: What about your character what will NBA coaches like?

Kyree: I feel I am very coachable, always wanted to learn new things and become a better player.

Leader: Where have you been training? Have you trained and learned from any NBA players during your process? Who?

Kyree: I’ve been training in San Francisco and Phoenix. I have learned from former NBA coach Kim Hughes, he also played too,

Leader: What NBA player do you want to play against the most?

Leader: What NBA player do you model your game after?

Leader: Nice the very two players you want to play against you model your game after.

Leader: How many positions do you think you can guard?

Leader: What makes a winner? What is the key to being a championship player and actually winning an NBA championship in your opinion?

Kyree: I’ll do whatever it takes to win. I will dive on the floor for every loose ball . Doing what you known for. Do the little things someone on the other team won’t do.

Leader: What is the NBA getting when Kyree Walker steps on the court?