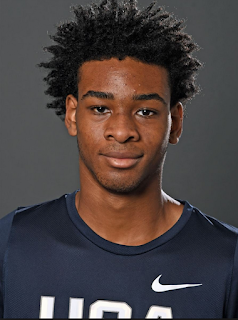 Unlimited potential comes to mind when you talk about Vandergrift high school star Greg Brown. He is a part of the super talented 2020 basketball recruiting class and is rated a 5-star by 247 sports. At 6-7 he is an extremely gifted power forward with crazy bounce. He is developing more and more of a dominant game on both ends of the floor.

You don’t see too many ball players at this age with this much energy and athleticism to dominate games at his size. Brown is the 11th ranked prospect and 3rd ranked power forward in the 2021 NBA Draft class by NBA Draft Room and you haven’t seen the best of this elite prospect. I had a 1 on 1 with Brown about his future in the NBA.

LJ: Your development athletically is insane. How old were you when you first
dunked?

LJ: What were your averages last season?

LJ: What was your best game in AAU? What were
your stats?

LJ: What about your game is improving the most?

LJ: You remind me of a mixture of Shawn Kemp/taller Zach Lavine. What NBA player do you feel
resembles your game?

Greg: Tracy McGrady in my opinion.

LJ: What type of offense do you like to play in that caters to your skills the most?

Greg: Motion offense, with pick and roll as well as pushing the ball in transition.

LJ: If you had to pick an NBA franchise what team
would you like to play for?

LJ: What do you bring to an NBA franchise? What
about your character stands out to an NBA
franchise?

Greg: I like to have fun and laugh a lot as well it encourages others to be great.

LJ: Do you consider yourself an NBA team player
or a Franchise player? Why?

Greg: Franchise Player because I can do it on both ends of the court as well as having the character to lead a franchise.

Greg: I play Great defense on 1 thru 5 and rebound at a high level as well as score on all three levels.
My shooting, IQ and feel for the game is improving and will take me to the next level.