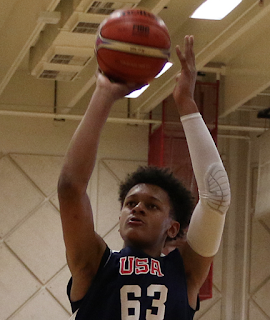 Paolo Banchero is one of the elite prospects in the 2021 class. He is a 6-8 220 5-star power forward who plays for O Dea high school in Seattle, Washington. He has an aggressive style of play and is almost unstoppable in transition. He is the top prospect in Washington, the 2nd ranked power forward, 5th ranked prospect in 2021 by 247 sports. I had a conversation with him for the 5-star corner on NBA Draft Room’s Prospect Room.

LJ: How does it feel to be a 5-star?
Paolo: It’s a good feeling just because I remember looking at ESPN/247 rankings when I was younger and thinking how I wanted that to be me.

LJ: What do you feel you have to improve on to be the best?
Paolo: I’d say having a consistent 3pt shot.

LJ: What about your game has improved that will be seen this season?
Paolo: My ball handling definitely.

LJ: What were the stats of your best game during the AAU season?
Paolo: 29 points and 9 rebounds at session 3.

LJ: What teams have shown strong interest this early in your recruitment?
Paolo: Washington, Gonzaga, and Oklahoma I’d say have shown the strongest so far.

LJ: Which team is showing the strongest interest?
Paolo: I don’t think there’s been a school that has really separated themselves.

LJ: What visits are you taking soon?
Paolo: I’m just taking these next 11 weeks to get ready for the season.