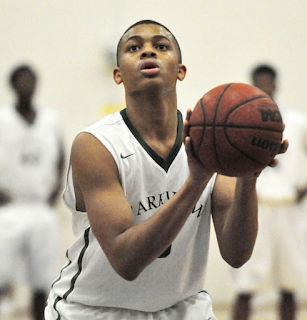 A prototypical 2 guard with all the size, skill and shot making ability to excel in the League. Keldon is a strong driver with an advanced mid range game. He’s more of a low center of gravity player but can also play above the rim. Kentucky is in good hands with Keldon and the rest of the recruiting class.

Strengths
Keldon Johnson’s jumper is a thing of beauty. He keeps is elbows in, rises up quickly and smoothly and has a picture perfect release. His outside shooting will be his calling card at the next levels of play and could make him a first round pick. He’s got really good size for the SG position and is a natural scorer and high level three point shooter.

A creative ball-handler, Johnson has a nice inside-out dribble, can take it to the hole with either hand and uses the euro-step well. He does a good job of changing pace and shows good body control and the ability to twist around defenders to get to the bucket. Plus he’s got a nice mid range game and a good floater, which he uses to score over length.

Johnson is a heady player who plays the game the right way. He’s focused, plays hard and plays to win. He gives good effort on defense and seems to take his assignment personally, and goes to battle every time out. He’s a high IQ player who plays with good positioning and doesn’t take plays off.

Weaknesses
Johnson has a good frame but is still very thin and lacks strength.

He’s not the most explosive athlete, as far as NBA level athletes go, and he’ll need to become an elite shooter and polished all around player to make his mark in the League. His foot speed and lateral agility aren’t elite and he could have a tough time guarding the more athletic NBA wings.

He needs to tighten up his ball handling and bring his dribble lower.