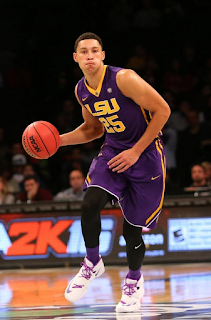 A unique talent. The best passer to come along in years but there are concerns about his attitude and his jump shot.

Pros
Simmons is an insanely quick, athletic and nibble 6-10 forward with a versatile offensive game. His best position is point guard and he draws and kicks as well as any player I’ve seen. He can get to any spot on the floor and his vision is elite.

Scores from 15 feet and in with either hand and can hit all sorts of unorthodox shots. Can drive into the paint against most defenders and has nice touch on the running floater.

Has quickness in the open court and changes ends in an instant. Plays the passing lanes well and is a solid perimeter defender.

Plays with good decision making and always has his head up, looking to find teammates. Physically he’s head and shoulders above the competition and his basketball IQ is off the charts.

Cons
Lacks an outside shot, which allows the defense to collapse into the lane. Needs to learn to assert himself on the offensive end and prove that he can carry a team on his shoulders.

Lacks a go-to move in the paint and needs some work on his back to the basket game.

His defensive intensity is not what it could/should be and there are questions about his attitude and leadership abilities.

Is not a great rim protector.