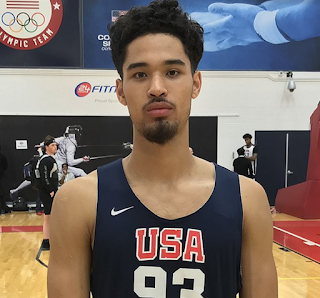 Johnny Juzang is an elite and dangerous shooter, but he is not just that. Juzang is 6-7, 200 and very versatile. He can play positions one through three, on both sides of the ball. He has a great basketball IQ which allows him to be a good distributor and play-maker.

LJ: What NBA player do you resemble your game after?
Johnny: It’s really players and I would have to say Klay Thompson, James Harden, and Kobe Bryant.

LJ: What is the most impactful part of your game?
Johnny: My ability to score.

LJ: What NBA team would you like to play for If you could pick a team?
Johnny: I would have to say the Lakers me being from here and being a fan but I would also have to say the Rockets. I have become a fan of James Harden so the Rockets too.

LJ: Evan Mobley is a part of that talented 2021 draft class. How long have you been knowing him?
Johnny: I have been knowing Evan since middle school.

LJ: Where did you grow up?
Johnny: Tarzana, CA.

LJ: How is it growing up in Tarzana?
Johnny: It’s cool; of course it’s a little town and doesn’t have as much as the big cities but it’s cool.

LJ: Your dad Maxie is a cool guy. How is the support of your parents and how important is it.
Johnny: It’s everything from my mom packing my lunches to my dad supporting me through whatever, it means everything.

LJ: What is your nationality?
Johnny: Vietnamese and black

LJ: In the NBA, the game is mostly mental. What would an NBA team like about your character?
Johnny: I would be easy to get along with. I feel that you work hard to get here why would you mess that up.

LJ: What about your game has improved from last season?
Johnny: My ability to be much more of a leader and my all-around skills.

LJ: What does Johnny Juzang bring to an NBA team?
Johnny: Immediate scoring impact from all three levels. Ability to space the floor as well as create. Also leadership and communication.