A powerful and explosive athlete who dominates the game with his physical presence, aggressive play and other-worldly dunking ability. The best dunker we’ve ever seen at any level. 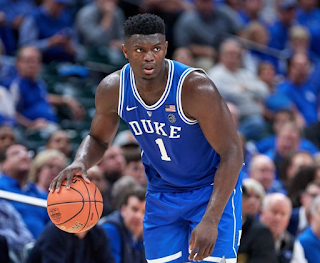 He’s a combo forward who excels in an up tempo game and can bring down the house with big plays, on both ends of the floor.

Strengths
Built like a bull on steroids, Williamson has great strength and supreme power, to go along with guard-like agility and insane leaping ability. He shows amazing body control in the air as he explodes to the rim and on his drives into the lane, avoiding offensive fouls while going 100 MPH.

He’s able to get from half court to the rim in a heartbeat and once he gets going downhill he’s nearly impossible to stop. His explosive first step forces the defense to bring multiple defenders and he’s a more than capable passer and decision maker with the ball.

He’s also an effective player in the lane, with excellent rebounding instincts. He can overpower opponents using his wide base and brute strength and he has the quickness and agility to rebound out of his area. He’s especially deadly on the offensive glass and he relishes the chance to hammer home a put-back dunk.

His back to the basket game shows flashes and he’s got a natural scoring ability. He makes his post up moves quickly to avoid the double team and has uncanny quickness for a 240 bound man child. He’s got good touch on a baby left hook and shows a good feel for creating space for his shot. His ability to elevate with strength allows him to bully his way to the rim, even against taller players. He’ll likely become a very polished post up player in time.

One of his biggest strengths is that he’s always in attack mode and plays with force and aggression. He’s a natural born scorer who propels towards the rim like a heat-seeking missile. He seems to know he’s the best player on the court and he looks to dominate.

He can play multiple positions and loves to bring the ball up the court and make plays for teammates. Although he can be a bit wild with his passes, he shows flashes of high level passing ability and a nice feel for passing teammates open. He’s got impressive handles for a young player of his size and has developed his right hand dribble (he’s a lefty) to become dangerous driving both directions. He’s also a great dunker with his off hand.

His amazing dunking ability is not only loved by the fans but brings a ton of momentum and energy to his team and that energy translates to the defensive end of the court.

Williamson is a very versatile defender who has the ability to guard some PGs, showing impressive quick feet and lateral agility. And he can guard in the post and protect the rim, using his great strength and leaping ability. He’s especially effective (and exciting) coming from the weak-side for the block, or chasing down the play and defending at the rim. Just like with his offensive game, his defensive game might not be well polished and complete but he makes plays that change the momentum of the game and he’s a force to be reckoned with.

Weaknesses
His outside shot is developing and has a ways to go before it’s a reliable part of his game. Doesn’t have the quickest release and is a bit inconsistent from outside.

Much of his game is predicated on overpowering opponents and being the best athlete on the court. How will he adjust/develop his game to compete against NBA size and athleticism?

He’s still developing his understanding of team defense. Takes too many gambles on defense.

Comparisons
A super-charged version of Lance Stephenson mixed with LeBron.