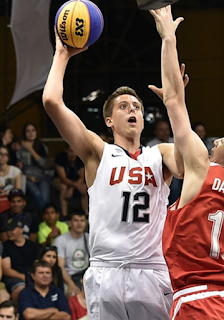 A highly skilled PF who can stretch the floor on one end and defend the rim on the other.

Pros
Collins is a super smooth offensive talent who can score from all three levels. His post game is advanced for a young player and his shooting touch sets him apart from most other big men. His jumper is quick and accurate with a high release point and smooth follow through.

Collins can score with his back to the basket using a quick drop step to get to the rim or utilizing the turnaround jumper. He’s a very crafty player who has an advanced repertoire of moves and a soft touch.

Does a good job of fighting for position and using his size to his advantage on the offensive and defensive boards.

A decent shot blocker who plays fundamentally sound defense and does a good job of going vertical to avoid fouls.

Cons
Lacks strength and will be overpowered in the lane against NBA centers.

Doesn’t have very quick feet or top end speed and can be a liability when guarding on the perimeter.

Doesn’t project as a force in the paint at the next level and will likely be more of floor-spacing big man.

Comparisons
Reminds of Channing Frye but with a bit more shot blocking potential.

Projection: mid to late first round pick in the 2017 NBA Draft