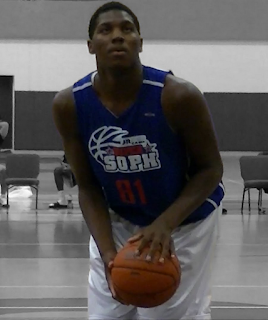 A big, wide-bodied lefty who has the physical tools to be a force in the paint but off the court issues make him a big time risk.

Pros
Can control the paint with his size and is a good rebounder who is dangerous on the offensive glass. Has a decent touch around the rim and is developing some nice back to the basket moves. Has the type of body that makes him a big time prospect, even if the skills haven’t caught up yet.

His second jump ability at his size is impressive and he’s got good suddenness for a big. Has quick hands, catches the ball well, and shows flashes of scoring ability.

On the defensive end he does a nice job of changing shots without fouling. Has the strength to hold his own on the low block and has enough lift to protect the rim.

Cons
Has the highest arrests per 36 minutes of any player in the draft. It remains to be seen if his off the court issues will derail his career before it begins or if they’re something he can grow out of.

Physically he’s still growing into his body and developing his conditioning. Staying in top shape will be a priority for him.

Doesn’t have a consistent jumper and doesn’t shoot free throws well. In time he’ll expand his game but for now he’s best within 5 feet of the rim. His back to the basket game shows flashes of potential but he’s very raw and is still figuring out the proper footwork.

Needs to work on his off (right) hand and get better at scoring with either hand.

Comparisons
He’s got great size and length like Andrew Bynum and a similar way of scoring the ball. Hopefully he can get his head screwed on better than Bynum.

Projection: possible second round pick in the 2018 or 2019 NBA Draft