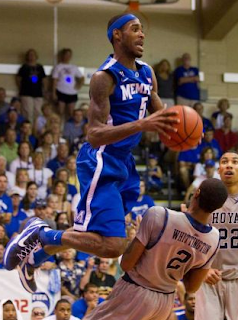 Barton is a sophomore who is playing at an exceptionally high level.  He has been scoring the ball efficiently, shooting at a high percentage and getting to the free throw line a lot.  At 6,6 he is a great rebounder for a guard and is pulling down better than 7.5 rebounds a game.

Has nice size for the shooting guard position and scores the ball well. Has an advanced mid range game and excels at scoring in the lane. Has really come on as a three point shooter and is greatly improved over last year. Moves the ball well on offense and doesn’t force shots.

Has long arms and great overall length.  Gets a lot of steals and is a good shot blocker for a guard. Has a natural feel for the game and really looks comfortable on the court.  Barton is having a great sophomore year and should be rising up draft boards.

A little bit thin and light and will need to bulk up to guard in the NBA. Not a pure shooter but is improving his outside shot rapidly.  Not a very good free throw shooter and needs to improve from the line, especially since he draws so many fouls.