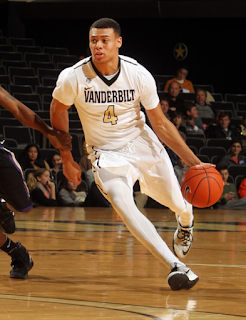 A long armed and explosive point guard who is raw but talented.

Pros
Has an NBA body with great length, strength and athleticism.

Is much improved as a three point shooter and can keep the defense honest. An efficient player who hits his open shots and is solid from the free throw line.

Pushes the ball well and has an aggressive style of play. Goes full speed but doesn’t (often) play out of control. Finds teammates well and knows when to pull up or back it out.

Has all the tools to be a standout defender.

Cons
Is still putting it all together as a basketball player and has a ways to go to reach his potential. Still figuring out the finer points of the game and working on his decision making.

Is he a true point guard or more of a combo guard?

Comparisons
Is built like Russell Westbrook – but not as talented. There’s a little Monta Ellis in his game.