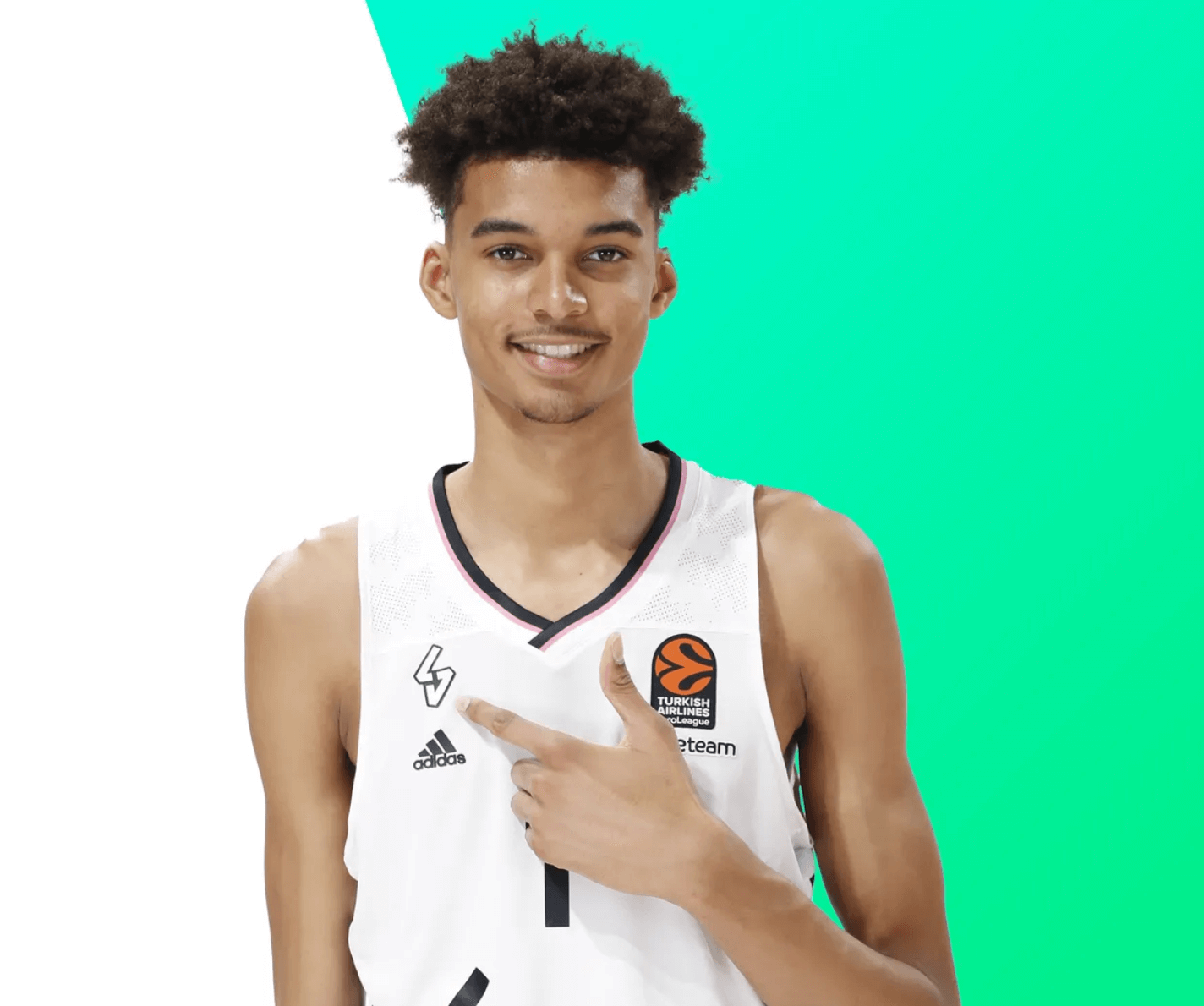 When you see something you’ve never seen before it can feel like your eyes are playing tricks on you.

Watching Victor Wembanyama reach up and dunk the ball with no apparent effort is one of those moments – a moment to hit pause, rewind and watch that shiz like 6 times in a row trying to figure out what just happened.

And when you see him drain a step-back 3-pointer with his long 7-foot 8-inch wingspan sweeping up and forward and reaching half way to the rim it’s mesmerizing and confusing.

It looks like he’s playing on an 8-foot hoop.

By now we’re all familiar with the elite talents of Victor Wembanyama but it seems important to step back and try to place him in a context we can better understand – in terms of his physical abilities, his rating as a prospect and how his game might translate from French to NBA.

Victor is often called the greatest prospect since AD or since LeBron and that praise is very much warranted.

Players with his unique size do come with risks but any concerns about his thin gangly frame are greatly outweighed by his massive talents. He’s unlike any prospect in memory with his versatile skill-set at such an elite size.

The obvious thing that jumps out when you watch him play is the sheer size. With a height of 7-2+, a weight of (at least) 209lbs and a 7-8 wingspan Victor is a massively long and tall human being. He’s not the tallest player we’ve ever evaluated but he’s far and away the most talented prospect at his size, by a mile.

He’s also got a frame that will add weight as he matures. He’s got broad shoulders and kind of “normal” looking proportions (even with his great length). If you compare his frame to a players like Bol Bol or Mo Bamba or Kristaps Porzingis Victor is clearly a more well put-together and physically gifted athlete – and bigger too.

He might not ever be a power player but I could see him bulking up to about 240lbs or 250lbs later in his career.  For comparison Rudy Gobert weighs in at just under 260lbs. Kristaps is about 240lbs.

As impressive as his size is, it needs to be mentioned that many outlier prospects fail. There’s definitely risk with Victor. Excessively tall or big players – or players with unique body types and proportions – have always had a level of intrigue but a sordid history of success in the league. Even the incredible Yao Ming only lasted so long. Ralph Sampson had about 3 fully healthy seasons. We all know the story of Greg Oden.

I would bet that Victor is an exception to this rule. He’s fluid and coordinated enough that it’s easy to describe him as an athlete, not just a super tall dude, and hopefully this natural athleticism helps him maintain his health.

Still, the rough history of crazy-tall prospects is something that should be considered.

This is where Wemby really shines. It’s not every year – or even every decade – we see such a natural skill level from such a young 7-foot+ player. His coordination and agility described above is complimented by his natural ball skills.

He has a good feel for putting the ball on the floor and using a couple of dribbles to create space for his shot or drive to the rim. He’s not throwing a ton of combo moves at defenders yet but has a good crossover, hesitation and reverse dribble that he uses to shake defenders. His ability to step back off the dribble and get into his shot is impressive.

He also has a really impressive first step and covers a ton of ground in a hurry. His dribble-drive game is becoming dangerous.

Speaking of his shot: The mechanics are rock solid and he has all the makings of a good floor spacer. He hasn’t shot the 3-ball particularly well – shooting under 30% in 2021/22 for LDLC ASVEL (on 3 attempts per game) in the top pro league in France – but his release is really smooth and he shoots it with a lot of confidence.

It seems pretty certain that he’ll be a floor spacer in the NBA and should approach percentages in the high 30’s from 3 at some point in his career.

This draft cycle we’ve been watching the incredible talents of Chet Holmgren at 7-feet tall. When Chet and Wemby matched up last summer in the FIBA U19’s Wemby was clearly the better prospect, even being a year and a half younger.

That’ not meant to be a knock against Chet. Wembanyama is just that good.

His length automatically makes him a shot-changer in the lane. While he might not be the most instinctual shot blocker he changes shots just by being on the floor.

He also moves his feet really well (actually, incredibly well) for a player his size and can guard in space, retreat without fouling and alter shots anywhere on the floor. He blocks a lot of 3 pointers thanks to his incredible length and quick reaction to shooters.

I think he compares favorably to countryman Rudy Gobert. When Rudy came into the league he was super slow and lacked nuance as a defender. It took him a few years and a lot of work on his body but now he’s become one of the best defenders in the NBA. Victor might not get all the way to that level but I’d bet on him making huge strides on the defensive end by the time his rookie contract is up.

In order to understand Victor’s unique size and abilities we need to mix and match traits found in various past prospects and meld them together into one super prospect.

In other words, there is no single comp for Victor Wembanyama; there just hasn’t been any other 7-2 players who can do what Wemby does.

His incredible size is like a mix of Kristaps Porzingis and Ric Smits but with better length and mobility. Imagine a more agile and explosive Smits or a longer and taller KP.

Or a longer, more focused Mo Bamba with better feel for the game, instincts and passion for basketball. Victor has a better frame than Bamba (who has high hips and an awkward gate) and better size but I could see some similarities there. Hmm, this one falls short.

Edit 1/2023: Victor is looking more and more like a 7-4 version of Kevin Durant. That is extremely high praise – about the highest praise imaginable for a prospect. But it’s deserved.

At the end of the day Victor is just his own player, incomparable to any that came before. He’s arguably the best prospect we’ve seen since LeBron and is pretty close to a lock to go no.1 overall in 2023, unless something unfortunate happens. He’s the type of prospect teams will focus a year’s worth of tanking energy into acquiring.

Rookies often take time. I can image two years from now people calling Wemby a bust because he “only” averaged 9 and 5 as a rookie. Players tend to peak in their late twenties or early thirties so Victor, who is currently 18 years old, is likely to keep getting better and better for the next dozen years.

Projecting out the exact course of his career is impossible. The most optimistic assumptions could be wrong. He could be a bust. Or he could be the generational talent that most evaluators think he is.

He’s also projected to be in a draft with some other really nice talents. Scoot Henderson looks sensational and I could imagine him having a bigger impact early in his career than Victor. The rest of the 2023 lottery is looking really strong as well.

However it plays out in the long run Victor Wembanyama deserves all the hype and accolades that he’s getting. He’ll have the draft worlds’ full attention over the course of this next year leading up to the 2023 draft as we watch to see if he takes the next step as a prospect and increases his impact on both ends of the floor.

And there will be a huge focus on next year’s lottery to see who wins the Victor Wembanyama sweepstakes.

And here are some highlights of the phenom himself: