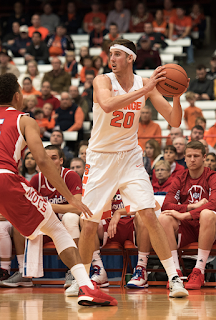 A stretch-four with NBA level shooting ability. Could be a valuable three point specialist at the next level.

Pros
A lights out three point shooter who has great form, a quick release and big time confidence shooting the ball.

Lydon has pretty good length and can surprise with his quick elevation and above the rim play. He’s not a run/jump athlete but he’s got some springs and enough quick twitch to hold his own.

Although he doesn’t project as much of an interior defender at the next level he does a good job of challenging shots at the rim and gets his share of blocked shots.

Knows his role and plays within the flow of the offense. Understands spacing and off the ball movement and does a nice job of finding his shot.

Cons
Will be a liability on post defense when guarding power forwards and doesn’t necessarily have the foot-speed to guard most wings.

If he can hold his own defensively he has a chance to earn minutes at the next level but for now he’s too one dimensional on offense and might be just a situational player.

Projection: late first to early second round pick in the 2017 NBA Draft