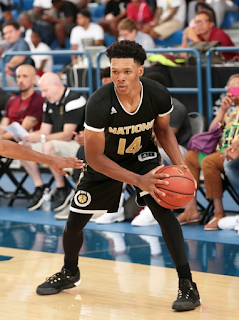 Overview
A pure point guard with high level athleticism, Duval can really explode to the rim and bring down the hammer. He’s got a strong build and a dynamic first step.

Strengths
Duval is a true lead guard who is always looking to get teammates involved. He does a nice job of controlling the pace of play and setting up the offense. Keeps his dribble alive in traffic and plays with his head up.

Has good burst combined with nice handles, which allows him to penetrate and dish, or take it to the cup. Can score in the lane with either hand and has enough elevation to throw down some nasty dunks.

Uses his high-end athleticism to shut down opponents and can be a real menace on defense. A ball hawk with quick hands and quick feet. Plays both ends of the floor.

Weaknesses
Doesn’t have the size to match up against some of the bigger PGs in the League. Can he hold his own in the post?

Has plenty of room for improvement on his outside shot.

Comparisons
He’s got a little Stephon Marbury in his game.

Projection: mid first to early second round pick in the 2018 NBA Draft