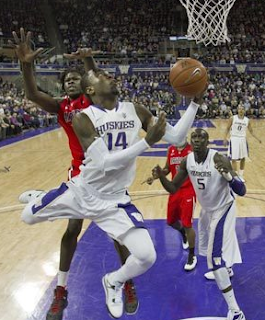 Dynamic combo guard with great size, athleticism and skill set. Could enter the draft this year and be a first rounder.

Elite level athlete with an NBA ready body. Has great quickness and explosiveness and can get into the lane and make plays. Very unselfish player with point guard skills in a 2 guard body. Keeps his head up with the dribble and finds teammates well.

Great scorer with an uncanny ability to get to the rim and make plays. Hard to stay in front of and can really explode off the dribble. Great leaper and dunker.  Uses his quickness well on defense and gets a lot of steals. Very solid rebounder for a guard.

Not a good free throw shooter or three point shooter. Has a lot of potential to improve his shooting but has a long way to go and will probably never be a great outside shooter. Turns the ball over too often and can play out of control. Tries to do too much and needs to learn to make the smart play and not always try for the spectacular play.

Had a serious knee injury in high school but seems to be back in great shape.

Projection: mid to late first round pick in the 2012 NBA Draft.