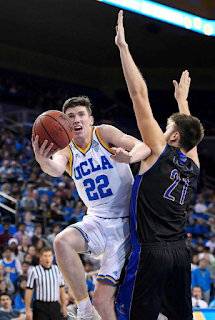 A fundamentally sound, highly skilled big man who excels on the offensive end. Has below average athleticism and is not much of a defender/rim protector but is crafty with a high basketball I.Q.

An accurate shooter who can hit a variety of shots and hit from all angles. Catches the ball well, has a great touch around the rim and a nice array of face-up moves; either taking it off the dribble or hitting step-back jumpers.

Leaf is a really slick passer with a great feel for the flow of the offensive game. Seems to have eyes in the back of his head and can make the no-look pass. Does a great job of facilitating the offense with his passing and court vision. Can handle the ball and take pressure off the guards with his outside play.

Has good awareness on the defensive end and makes up for his lack of speed by being in the right place at the right time.

Fundamentally sound rebounder who shows a willingness to battle in the paint.

His ability to space the floor and make the right basketball play give him a lot of value.

Cons
Has slow heavy feet and doesn’t change directions well. Lacks the foot speed to guard outside the lane and isn’t great against the pick and roll.

Isn’t a strong post defender or rim protector and will be outmatched physically by NBA Bigs.

Comparisons
Adam Keefe. Tre Lyles. Or a much better version of Kyle Wiltjer.