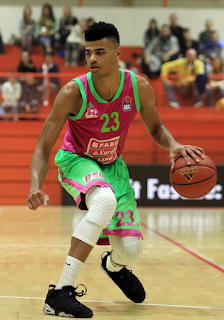 A raw but promising SF prospect who projects as a high level defender at the NBA level.

Pros
Well built and athletic forward who has all the tools you look for in a young wing. Has shown good development as a ball handler, passer and perimeter game.

Has really good mobility and fluidity and a quick first step which allows him to blow by defenders and elevate in the lane.

A menace on the fast break who changes ends in a flash.

His perimeter defense should translate well and he does a great job of pushing tempo off of steals and defensive rebounds. Can be a one man fast break.

Cons
Still very raw as a shooter and ball handler and is still developing his understanding of the game. Can he consistently hit the open three point shot?

Needs to add muscle and fill out his frame.

Comparisons
Smooth like Rick Fox. Reminds of Thabo Sefolosha, especially with his defensive potential but is longer and faster than both.

Projection: mid to late first round pick in the 2016 NBA Draft