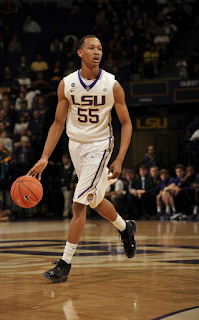 A tall point guard who can play off the ball and is a solid defender.

Pros
Has nice height for the position, allowing him to see and make passes over defenders. Does a good job of getting into the lane and finding the open man. Has decent athleticism and can play above the rim.

A real pesky defender who brings a lot of heart and hustle. Can guard multiple positions and rebounds well for his position.

Cons
Doesn’t do any one thing exceptionally well and is an average offensive player. Isn’t a great three point shooter and doesn’t have the quickest first step.

Comparisons
Reminds of Shaun Livingston but without the big upside. Projects as a role player at the next level.

Projection: late first to mid second round pick in the 2016 NBA Draft.