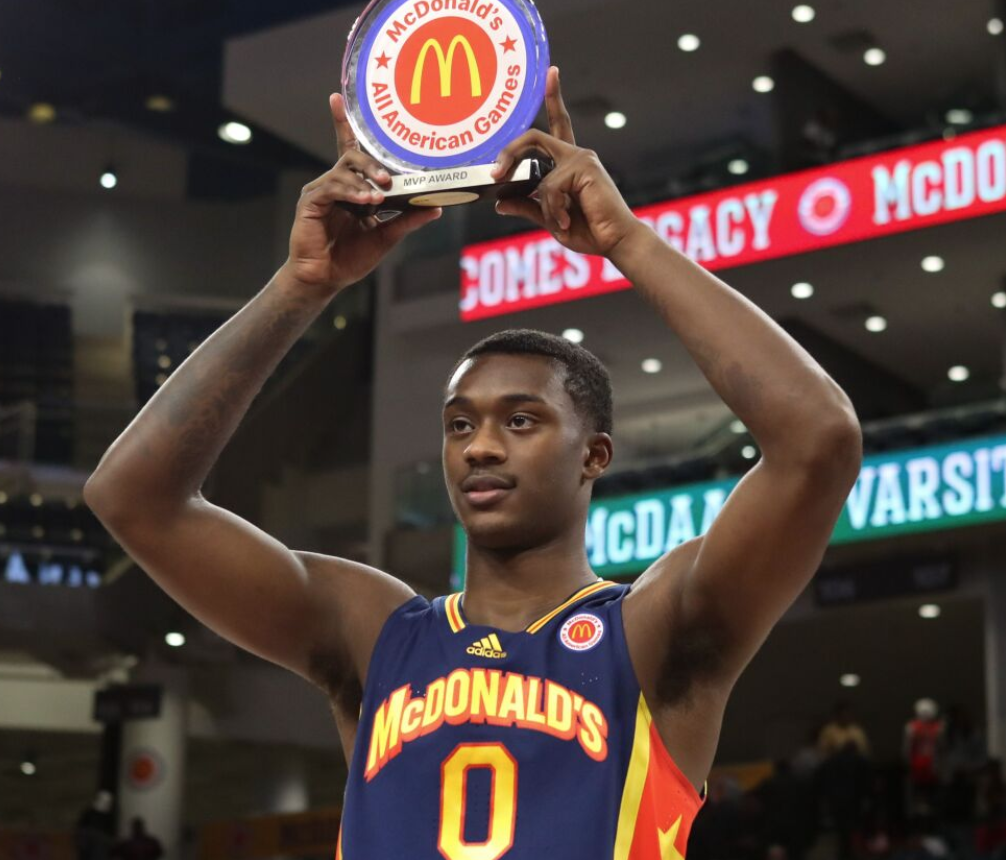 This might not be the most star-studded group of players but there were some high level NBA prospects on display last night in the 2022 McDonald’s All American Game. As was mentioned on the broadcast, this class originally had Jalen Duren, Emoni Bates and Shaedon Sharpe but all 3 reclassified, taking some of the star power out of this class.

One thing that stood out about this group is how they approached the practices and the game with focus and a business-like attitude. We saw some defensive intensity and hustle, which we don’t always see in this type of setting.

This McDonald’s game didn’t have any huge breakout stars or change too much draft stock but mainly solidified what we already knew about this group of prospects. It’s a solid group but probably not an all time great group.

A few players who did lift their stock this week are Anthony Black, Cam Whitmore, Nick Smith and Kel’el Ware. Look for all four to rise up draft boards over the coming months.

Anthony Black stands out as a big time talent, even in a gym filled with talent. The 6-7 point guard/wing showed off his elite feel for the game and his ability to make plays for teammates. He’s got great size on the perimeter. He reminds a bit of Josh Giddey with how he plays with his head up and sees the floor. Makes the game look easy.

Cam Whitmore is for real. The Villanova recruit looks like a future first rounder. He’s got all the tools; he’s compact and strong, quick and bouncy and plays an aggressive style. He’s going to be a special player for Jay Wright. There’s a chance he’s a one and done or a two and through.

Kel’el Ware gives Oregon a potential one and done top 10 pick. I had been thinking of Ware as a two-year college player with top 10 potential in 2024 but he looks like he could be ready sooner and be a first rounder next year. Ware has freaky athletic ability for his size. If he can rev up his motor consistently he can be a star. Him and Bittle et al will be a fun frontcourt to track next season at Oregon.

Nick Smith is top 5 material.  He’s going to put up numbers next year for the Hogs and looks like he could be a 20ppg scorer in the NBA before too long. He’s a 3-level scorer with a sweet in-between game and a feathery jumper. He’s got size, length (6-9 wingspan) and above the rim athleticism.

Dariq Whitehead is an elite all around talent. I love his demeanor on the court. His ability to shoot on the move really stands out and he’s become one of the better shooters in this class. Also a big time athlete, very smooth up and down the court. Makes it look easy. Dariq was the game MVP with 13, 7 and 7.

Derrick Lively stands out athletically. So coordinated for a 7-1 guy. NBA starter level talent with star potential. Isn’t an elite rim protector but is a very impactful overall defender. Changes ends really well and is hyper-mobile. The sky is the limit for Lively.

Jarace Walker can do so much on the court. Obviously he’s a powerhouse of an athlete but is also super nimble, quick, has handles and ball skills. As a big versatile forward he’ll be a nice fit in today’s NBA. Has some Paul Milsap in his game. It’s awesome to see Houston land a one and done talent like Walker.

Amari Bailey is going to be fun at UCLA and will thrive in that system. He’s been good for so long we kind of forget about him but he’s very much a high level talent with lottery potential. Seems to be a second or third star type of player, not a true no.1.

Ernest Udeh Jr. is exactly the thick, broad-shouldered center you’d expect Bill Self to recruit. He’ll be there for 3 or 4 years and develop. He’s got the tools to make it in the league but it’ll take some time.

Gradey Dick showed off his nice athleticism and his excellent shooting range. He looks poised to take over the Christian Braun role at Kansas (if Braun goes to the draft) and should find a similar level of success. He might be a 2 or 3 year college player before jumping to the league.

Julian Phillips is going to make some program very happy, after he recently de-committed from LSU and opened his recruitment.  The 6-7 wing is a long and wiry athlete who can hit the 3. Might not be a one and done but has NBA 3&D player written all over him. He had a solid showing in the game, despite battling an illness.

Keyonte George didn’t have a huge night but showed some flashes of his elite scoring ability. He’s going to be a load to stop at Baylor next year. Seems to be just outside the top group in this class and could end up drafted in the 6-12 range next year.

Dillon Mitchell has lottery potential. His best basketball is many, many years ahead of him and his tools are elite. He’s a freak above the rim player and also has great body control and overall athleticism. Texas got a really good one.

Arterio Morris gives Texas two really good ones. The 6-4 guard can really score the ball and will likely have some really big games during his Longhorn career. He’s got a really smooth outside shot with a quick release and great accuracy.

Mark Mitchell definitely belongs. He scored a few late buckets to end with 19 points and looked solid all night along. He’s probably not a star but is a solid link on a winning team kind of player.

Jordan Walsh showed a lot of flashes but didn’t really put it all together in this game. Still, he’s a very high level prospect; a really interesting athlete with a great frame and a pro style game. Playing alongside Anthony Black and Nick Smith next season at Arkansas will give him plenty of opportunities to shine in front of NBA scouts.

Kijani Wright probably isn’t on the fast track to the NBA but should put up some monster rebounding numbers over the years at USC. Scouts will be looking for him to expand his game a bit more before jumping to the league.

Brandon Miller is a really fun player to watch. His size and length project well to the next level. He’s a smooth operator, has a nice touch in the lane and has court vision. Alabama will be a must watch team next year with Miller, Jaden Bradley and possibly the return of J.D. Davison.

Cason Wallace might not have star potential but he’s a tough, hard-nosed guard who impacts both ends of the floor. He should step right into the TyTy Washington role next season and have an immediate impact.

Chris Livingston has a really well rounded offensive game. The big, strong wing is equally adept at taking it to the rim or stroking the 3 ball. Of all the Kentucky recruits he seems like the most likely to be a one and done player. He’s a hard worker with a mature game and should thrive on the wing next to Cason Wallace next year.