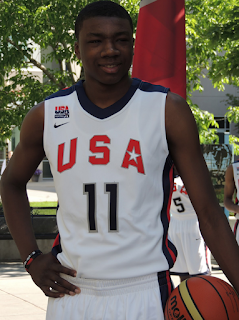 Pros
A very efficient offensive player who shoots a high percentage and has really nice touch around the rim and from mid range. Is expanding his game and developing three point range. Projects as a decent three point shooter in time, and has some stretch four qualities, to go along with a solid post up game.

Has nice spin move and drop step and the ability to score with either hand. Gets good position and uses his size well.

A passionate player who brings energy and hustle to the court. Plays a team-first game and is a winner.

Cons
Is not a great free throw shooter but has the form and overall shooting touch to improve in this area.

Is not a run jump athlete and there are questions about how his game translates to the today’s NBA game. Can he defend the rim at the next level and can he guard the three point line?

Comparisons
He’s got some Anderson Varejao in his game and some Al Jefferson.
A taller Johnny O’Bryant III.

Projection: late first to early second round pick in the  2017 NBA Draft