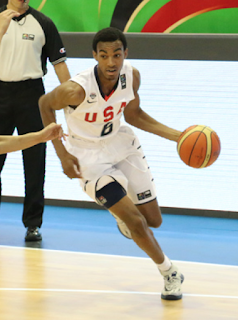 A long, lean and wiry wing with a good looking jumper.

Pros
Ferguson has really nice length and a smooth shooting stroke. He gets good elevation on his jumper, has great for and snaps his wrist well. Hits a good percentage from both mid range and three point land.

He’s got nice height for a SG, with good length and high level athleticism. Quick and graceful in the open court with very good quickness. Gets off the ground exceptionally well and is a highlight reel dunker. His leaping ability is his biggest draw right now and it wouldn’t be a surprise to see him win an NBA dunk contest. Can play with his head at the rim.

Can get his own shot off the dribble and has good movement off the ball, using screens. Has the quickness to loose his defender in half court sets.

His length and athleticism give him good upside as a defender.

Cons
Doesn’t have a lot of strength and will have to put in work to gain the muscle to hold his own against NBA level competition. His lack of strength limits his effectiveness in lane, both scoring in traffic and getting rebounds.

Doesn’t always play with good control and/or decision making. Gambles on D. Gets loose with the dribble and isn’t great at making plays off the bounce.

Doesn’t seem to be an alpha dog or a great leader.