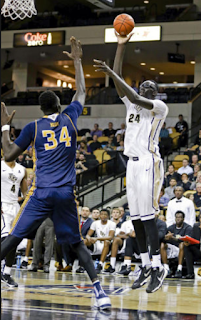 A giant of a man who has shown steady improvement as a basketball player and is becoming a force at the college level. A native of Senegal who doesn’t have many years of bball experience but is starting to put things together on the court.

Strengths
Fall is perhaps the biggest basketball player in the world and he uses his size well on the court. His presence in the lane is unmistakable, as he towers over opposing players and can play with his hands up at the rim, without jumping. There are reports that he’s one of the 15 tallest people in the world!

On defense he alters a ton of shots and forces the offense out of the lane. He does a good job of going vertical and using his length, without fouling. He knows his role as a defender, rim protector and rebounder.

Gets a lot of put-backs and easy buckets in the lane, leading to an outstanding field goal percentage in the high 70’s. While he lacks post moves, he does show decent hands and some promise to develop his back to the basket game.

Weaknesses
There are questions about how his game will translate to the NBA. Can he keep up with the pace of play? Does he have enough speed to guard opposing centers?

His offensive game is very raw and unpolished and he disappears too often on the offensive end (having had multiple games with zero points). He can score from within 3 feet but outside the lane is a different story.

He’s a very poor free throw shooter, shooting below 50% from the charity stripe.

Projection: mid second round pick in the 2019 NBA Draft

Underrated or overrated? Who are your player comparisons for him?