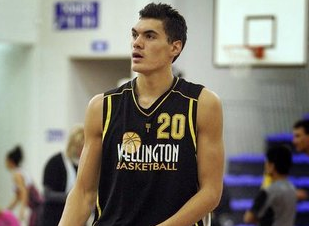 New Zealander who is fairly new to the game of basketball but has a world of potential due to his NBA ready body and great height.

Very big, powerful and well built athlete with legit NBA size. Has great strength which allows him to get good position in the lane. Very solid rebounder and has a lot of potential as an interior defender, who will only get better as he learns the finer points of the game.

Very fluid athlete with good coordination, speed and agility. Runs the court well and is a good leaper and dunker. Has good form on his jumper and should develop a consistent mid range game as he matures. Shows a good work ethic and seems to be dedicated to improving as a basketball player.

Has a lot to learn and will have to continue his transition to the American game. Needs to get into better shape, although he seems to be working hard and improving his conditioning. Very raw offensively with not much of a back to the basket game.

Projection: Mid to late first Round Pick in the 2013 NBA Draft