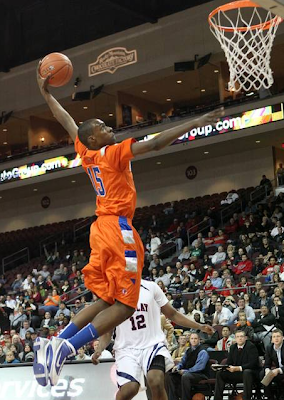 Muhammad has an NBA ready body and a feel for the game beyond his years. Has decent athleticism but is not a truly explosive athlete like many NBA wings.

Has ideal size for the shooting guard position and all the skills to be a very good wing player in the NBA. Very strong and well built which allows him to post up smaller defenders. Left handed player with a good handle. Has a great mid range game and creates his own shot well. Very quick first step and has the strength to score in the lane, even while drawing the foul. Uses ball fakes and head fakes well to get the defense off balance.

Has vastly improved his three point shooting and is becoming deadly from beyond the arc. Will have to continue to work on this area of his game to develop NBA range but has excellent work ethic and drive to be great. Shares the ball well and plays a team game.

Has a very good head on his shoulders and is a great kid. Humble, hard working and has excellent basketball I.Q.

Although Muhammad is a very good athlete he does not have elite level explosiveness like a Vince Carter or Dwyane Wade.  He’s more like Brandon Roy (in his prime) which is still pretty damn good. Doesn’t project as a great defender at the next level and will struggle against the speed and athleticism in the NBA.