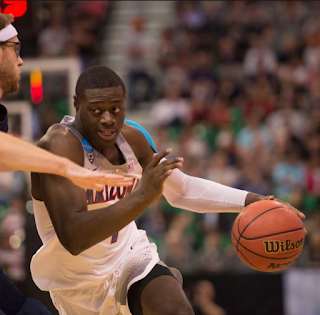 Overview
Alkins is as strong as a bull and is very aggressive with his moves to the rim. He’s a polished ball handler and highly skilled player who is starting to put it all together on the court.

Strengths
A natural scorer who won’t be denied. Has great strength in a compact frame, which allows him to out muscle defenders and create space for his shot. Has good handles and uses his size well to get into the lane.

Plays an uptempo attacking style and puts a ton of pressure on the defense. Has good burst and a nice first step.

Can score from inside and out. Has an improving three point shot, a good step back jumper and overall good scoring touch.

Defensively Alkins is a gamer who comes to play. He shows leadership qualities with the way he picks up the intensity on D. He’s versatile, with enough foot-speed to hang with quick guards and he can use his strength to body-up bigger forwards.

Weaknesses
Tends to force the issue and doesn’t have great shot selection. Is a natural scorer who doesn’t always do a good job of moving the ball and getting teammates involved.

Has good but not great athleticism and average lateral agility.

Doesn’t always but in the effort on defense or getting back in transition. Reaches instead of sliding his feet and gambles for steals too often.

Comparisons
His size and passing abilities remind of Lance Stephenson. He’s got some Isaiah Rider in his game.

Projection: mid to late first round pick in the 2018 NBA Draft