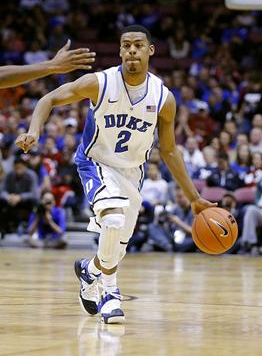 Pros
An intense and tenacious player who brings great attitude, effort and intelligence. Doesn’t need to score
to impact the game and is a committed defender and team player.

Is an exceptional free throw shooter and is vastly improved from three point land; now shooting about 40% from downtown. Is usually a good decision maker and gets his teammates involved well.

A lock-down defender who puts a lot of pressure on the ball. Gets a good amount of steals and is a solid rebounder too.

Cons
Is not a high level athlete and has only average size for the position. Doesn’t elevate very well and will be outmatched physically against bigger NBA lead guards.

Is not a great scorer and shoots a low percentage from the field. Struggles to get into the lane and lacks an explosive first step.

Projection: possible second round pick in the 2014 or 2015 NBA Draft