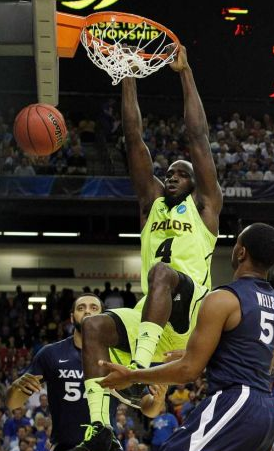 Rock solid forward with explosive leaping ability and a tough, hard-nosed game. Bangs around in the paint and is a tough physical presence. Knows his role and plays within the team game. Good defender who gets a lot of blocked shots and plays with good position and fundamentals.

Committed rebounder who goes after ever board with reckless abandon. Scores well in the paint and gets a ton of dunks. Attacks the rim as hard as anyone in college ball. Shoots a very high percentage from the field and only takes good shots. Beginning to expand his offensive game to include a mid range jumper and a dribble-drive. Has improved his free throw shooting a lot and is now very consistent form the charity stripe. Mature player who shows leadership qualities and great work ethic.

Undersized for the power forward position at 6,6 and will have a tough time matching up against most NBA power forwards. Still limited offensively and has a lot of work to do to become a consistent mid range shooter.

Projection: Early to mid second round pick in the 2012 NBA Draft