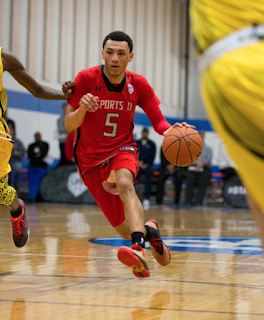 Jahvon Quinerly, a point guard out of Hudson Catholic high school by way of Jersey City, is one of the most dynamic players in the country. Quinerly is rated a 5 star point guard by 247, Scout, Rivals, and ESPN; he is no.3 in New Jersey, no.4 among point guards and the no.15 prospect in the nation for the recruiting class of 2018.

Quinerly is lightning in a bottle and a bullet in transition. He can score from anywhere on the floor with the ability to draw double teams. Quinerly has exploded in games including 31 points and 10 assists in a sectional semifinal game and 32 point 7 rebounds and 10 assists in the Metro Classic.

Quinerly has great court vision and is able to get others involved, Quinerly is the type of point guard that can lead a championship level team. He has a game similar to Damian Lillard but with more speed (and less size).

At 6-0 170 he packs a variety of offensive moves with elite dribble skills. Quinerly could be a one and done player. He has the scoring and play-making ability to be an impact point guard at the next level. I see Quinerly being a top 20 pick in the 2019 or, if he decides to stay, 2020 NBA draft. He could even have the talent to be a top 10 pick.

Quinerly is the definition of show time on the basketball court and will be a crowd pleaser. He isn’t on any NBA draft boards but I believe by the end of his freshman year Quinerly will be ranked among the best prospects in his draft, my prediction is 2019.