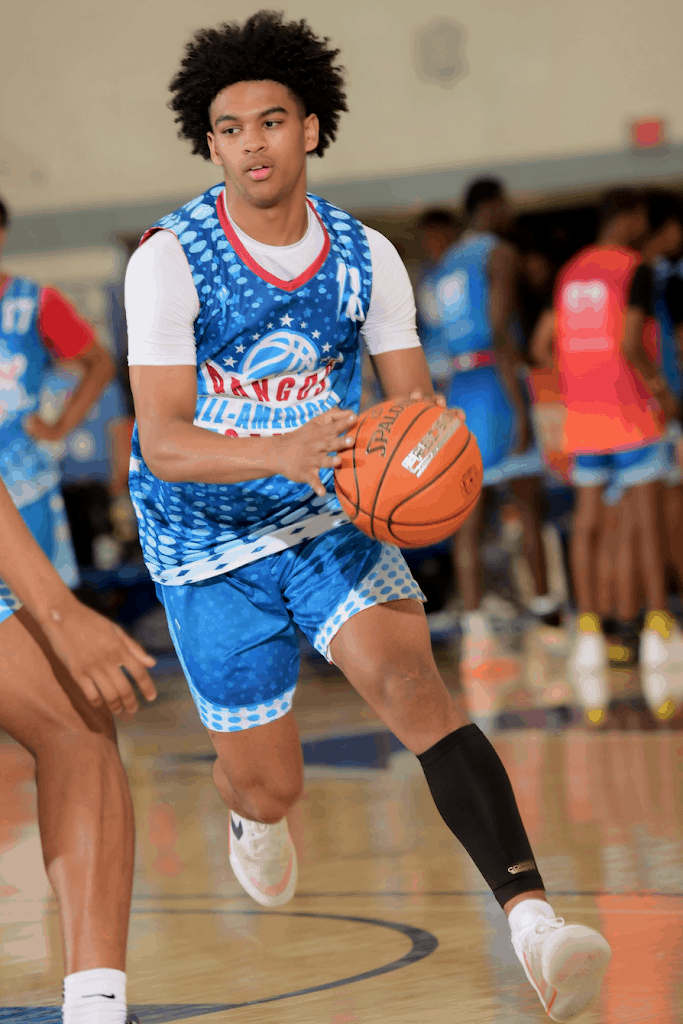 Skyy Clark is not your regular 2022 basketball prospect. On the court, he is a 6’2 190 magic ball handler with an arsenal of offensive moves. He plays for Heritage Christian in Northridge, California and has been fed knowledge by the greatest basketball player to ever play, LeBron James. Off the court, Clark works harder than your average young basketball player. Perfecting his craft and readying his skills for the next level.

Clark could be one of those players that comes straight out of high school or is a one and done. Whether it’s the 2022 or 2023 NBA draft Skyy Clarke looks like a certified NBA lottery pick. Watching so many good ball handlers throughout high school, no one is better than Skyy Clark. We had a chat for Prospect Corner for NBA Draft Room. 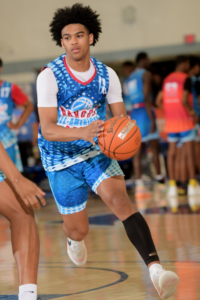 LJ: When it’s your time what type of impact can you bring to an NBA roster?

Skyy: When/ if I’m fortunate enough to play in the NBA I will bring leadership, toughness and all around great play anytime that I’m on the court. I take pride in playing both sides of the ball.

LJ: Its being said the NBA could take away one and done by the time you are draft eligible. Is skipping college going to the NBA something you will consider if the option is there?

Skyy: If I’m blessed to be in the conversation to come right out of high school I would definitely have to entertain that. It’s every players dream to play in the NBA and if it’s a first round guarantee I feel you have to look into it.

LJ: What do you think of RJ Hampton going overseas? Does that option intrigue you?

Skyy: I think RJ and his family did what they felt was best for him to prepare him for the NBA. He’s an extremely great player who has a very bright future so he couldn’t go wrong either way I don’t think.

LJ: What NBA player do you model your game after?

Skyy: People tell me I remind them so much of Kyrie Irving to the point my AAU coach and teammates on Strive for Greatness nicknamed me Skyrie (laughs) and he is definitely someone I look up to and try to take parts of his game as you can see by the way that I play. He’s my favorite current player.

Skyy: Playing on team Strive for Greatness helped me because having so many great players it teaches you to always have to bring it every practice and every game or you may get passed over by the next person because the team was so strong. We had a really close brotherhood so we pushed each other like brothers. We only wanted the best for each other.

LJ: Your ball handling skills are special. How much training do you do off the court?

Skyy: I train every day, my handle came from watching videos of Kyrie Irving and also working with my bro Dribble2Much a lot, he has trained me since I started playing ball. I also worked with a trainer named Travis Nichols on some stuff as well but Dribble2Much got my handle super nice but he is so much more than just a dribbling trainer so don’t let his name fool you.

LJ: I call LeBron James the perfect basketball chess player because of his masterful IQ on the court to be a coach and a player with the ball. What has he been able to teach you that reflects your play on the court?

Skyy: Bron helped me in game by just giving me advice on situations and what to do if it happens next time. It’s really like having a cheat code having him because he’s the greatest player in the game and you just have to soak up any information he gives you because it’s really a once in a lifetime thing to have the best player basketball has seen giving you knowledge plus it’s pretty amazing to see him going crazy when you dunk or hit a big shot, it really gives you the confidence to feel like you can accomplish anything out there on the court.

LJ: It’s a lot of good players that reach the NBA but the game is 90 percent mental. What about your character will NBA teams love that guarantee you are the right player.

Skyy: Things that will let NBA coaches or GM’s know they are making the right decision with me is that I put all my faith in God and that they would be getting a player that will never stop wanting to be the best player, teammate, or person around. They will get a true leader and someone they can build their franchise around.

LJ: What has been your most impressive game so far in your basketball career? What were the stats of that game?

Skyy: I have had so many 30 or 40 point games that I honestly don’t remember. I try to not dwell on the past very much but I have had some big games but if you twist my arm the game where I hit the game winner in front of LeBron was pretty memorable, I mean how could it not be (laughs)

LJ: What top high school prospect did you have the best game against? What were your numbers that game?

Skyy: I’m only a sophomore and my freshman high school season I didn’t get to play against many top players in Cali but this season will be different we have some top teams we are playing against so I will definitely keep you posted on that. But as far as impressive games as a freshman I had quite a few 30+ point games with double digit rebounds and assists.

LJ: California has continued to have some of the most talented prospects in country each class. Do you feel you are the best in 2022? Why?

Skyy: Cali is loaded with talent right now especially in 2022 and I feel like I’m the best because of my total body of work and everything that I bring to the table as a player.

LJ: Tell me about coming up in Northridge and the type of town it is?

Skyy: Well I just recently moved to the Northridge, Ca area but I’m actually from Minneapolis, MN. We moved away from there to Atlanta, Ga when I was 4 years old and moved to Calabasas, CA when I was 9 years old. I lived in Calabasas for the most part since we moved to Cali. The type of place it is just like the rest of Los Angeles is that it’s pretty magical. You see any and everybody out here like all of the stars and everybody is more normal than you think.

LJ: When did you know you wanted to play basketball?

Skyy: Well I didn’t start playing basketball until I was 10 years old but it was around 7th grade when I knew I wanted to take it seriously, something just clicked one day and I all of a sudden fell in love with it and wanted to be the best player on every court I stepped on.

LJ: Tell me about the influence of your parents and what their support means to you?

Skyy: My parents mean everything to me. They have been very supportive of me and my career but they also have kept me strong in my faith in God and kept me humble and also let me be a kid so it’s a good balance. My dad Kenny Clark is an ex NFL player for the Vikings and my mom Sarah was a celebrity makeup artist but she gave that up when she got pregnant with me so she could be the best mom possible and be a true mother to me and my brothers and sisters.

LJ: What will the basketball future get out of Skyy Clark?

Skyy: The basketball future will get a Skyy Clark that will always give you his best and always aim to take your breath away!!!!