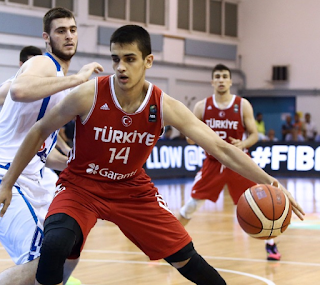 Solid, well built and highly skilled big man with a nice scoring touch. Has transferred to Georgetown and will have to sit out a year before being eligible to play.

Pros
Has a solid frame with good length and strength. Holds his own in the paint and battles hard to get position. Has good coordination and mobility, although he doesn’t blow you away with end to end speed.

Can score with either hand and is becoming a real threat with his back to the basket. Has very good shooting form and range out to 3. Looks capable of becoming a good NBA three point shooter in time.

Faces up well and has a variety of moves to find his shot in the mid range. Uses ball screens well and can shoot off the dribble well for a big man. Shows good patience with the ball in his hands and plays under control.

Fundamentally sound on the defensive end. Gets position well and does a good job of avoiding fouls. Has all the physical tools to hold his own at the NBA level and has an intriguing amount of upside.

Cons
Isn’t a big time run-n-jump athlete and doesn’t have ideal speed. Doesn’t project as much of a rim protector at the next level.

Needs to improve his help defense and defensive rotations.

Projection: early to mid second round pick in the 2020 NBA Draft