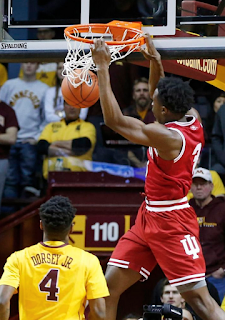 Powerful and aggressive with a 7-6 wingspan. Need I say more?

Pros
Anunoby has rare physical attributes including a reported 7-6 wingspan to go along with really good strength. He’s got good quickness and is a powerful, rock solid athlete.

His calling card is his defense, where he has the ability to harass dribblers on the perimeter and guard in the post as well. His versatility is a big plus but what sets him apart is his commitment to guarding every time down the floor. He plays with energy and hustle and wears opponents down over the course of a game.

Is becoming a better shooter from deep and has the tools and work ethic to become a really good outside shooter.

Cons
Is still very raw offensively, especially with making plays off the dribble. Needs to polish his mid range game and get better with his footwork.

Still has a lot of work to do to become a knockdown shooter from outside.

Comparisons
There’s just a little touch of Kawhi Leonard in his game, although OG is bigger.

Projection: lottery to mid first round in the 2017 NBA Draft