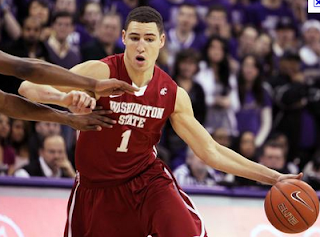 Junior shooting guard who projects as a mid to late first rounder.  Thompson is a versatile wing who is becoming a good catch and shoot player with range to NBA three. Has had some minor off the court issues but seems to have his head on straight and ready to put past mistakes behind him.

Good height and strength for a shooting guard which helps him score in the lane and get his shot off. Has really improved his outside shooting and has good form on his jumper. Has a quick release and is tough to block. Surprisingly quick first step and can get into the lane with the dribble and finish at the rim.  Is  used to being the go to guy and plays with a lot of confidence. Very good free throw shooter.

Average athleticism and jumping ability. Turns the ball over too much (averaged 3.4 T0s a game the past two seasons). Needs to become more consistant with his outside shot.