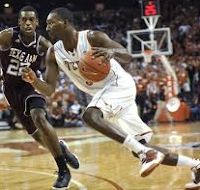 Hamilton is a versatile wing player with a somewhat unorthodox but very effective outside shot.  After two  seasons of ballin’ for the Longhorns he is now taking his game to the NBA.  He projects as a mid first round pick and could be rising up draft boards, possibly even slipping into the back end of the lottery.

Has great size on the wing.  Measured very well at the combine and is a legit 6,8 with good strength and muscle.  Very accurate from beyond the three point line and has a good feel for the mid range game.  His jump shot is not exactly textbook but he makes a high percentage of his shots and shoots the ball with a ton of confidence.
Good athlete who likes to attack the rim and knows how to use his body to shield off the defender and draw fouls.  Powerful dunker with good hops, although he is not the most fluid athlete and is unlikely to be mistaken for Vince Carter anytime soon.  Despite his skills as a scorer he plays within the offense and shares the ball well. More of a catch and shoot player at this point but shows an increasing ability to shake free and get his own shot. Runs the court very well and is always ready to shoot the ball.

Can sometimes fall in love with the three point shot and needs to keep defenders honest by taking it to the rim more.  Has good ability as a defender and rebounder but needs to commit to these aspects of the game.