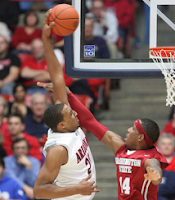 Derrick Williams is an other-worldly athlete who has recently developed into a very skilled basketball player as well.  After just two seasons at Arizona he has become an elite prospect and could be the first pick in the 2011 NBA Draft.

With Williams it all comes back to his explosiveness, raw power and agility.  He can jump out of the gym with great body control and ability to finish.  He is quick getting up and down the floor and should be a highlight reel type player at the next level.  His offensive game has expanded to include a very impressive jump shot and quickly improving post moves.  He can back down his man and make plays in the lane with his good strength and quickness.  Good rebounder and improving defender.

There’s not a lot not to like.  He could be taller… or a better three point shooter but the reality is that Derrick Williams should be a star in the NBA.