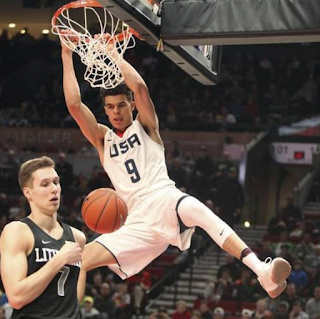 Overview
An elite wing prospect who has awesome ability for a 6-10 player with huge upside on the offensive end. The best offensive talent in the draft but recovering from spinal disc surgery.

Strengths
Porter has unique skills for a 6-10 player with a great looking three point shot and excellent athleticism. He gets incredible elevation on his shot and is almost impossible to block. Has all the makings of a big time scorer at the next level.

Has ideal size, length and athleticism for the SF position, with a 7-0 wingspan and 9-0 standing reach. He elevates well and can play above the rim with ease.

His shooting skills are his most elite trait but he also attacks the bucket well off the dribble and has an advanced in-between game.

He’s a well rounded player who plays both ends and is solid in all aspects of the game. He plays with intensity and a ton of confidence. He knows he’s the best player on the court and doesn’t back down from the big moments.

Porter is fundamentally sound with high level understanding  of the game. He shows great awareness of spacing and knows how to operate within the flow of the offense and keep the ball moving, while also knowing when to take over the game.

On defense he’s got the versatility to guard inside and out and enough athleticism to stay with smaller wings. He’s a solid team defender who understands rotations and team concepts. He can guard beyond the three point line and also defend at the rim.

Weaknesses
There’s no glaring weakness in Porter’s game. He’ll need to add strength while keeping his mobility and he’ll have to work on his defensive effort.

He doesn’t have elite quickness or elite length for his size, with just a plus 2 wingspan.

The spinal disc injury is hopefully not a big deal but will be factored into his draft stock.

Comparisons
Looks like Kevin Durant with his sweet three point shot and ability to play above the rim.