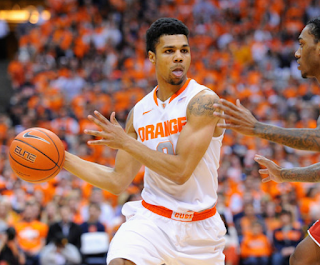 A steady vet with a solid, if unspectacular all around game.

Pros
Has improved each year and become a rock solid contributor in all aspects of the game. Plays an intelligent game with good shot selection and always making the right play. Hits a high percentage from the field and has developed into a good three point shooter.

Has excellent athleticism and should be able to hold his own at the NBA level as a 3&D player.

Has much improved ball handling skills and is becoming a good set-up man. Keeps the ball moving and plays the game the right way.

Cons
Doesn’t really stand out on the offensive end and is good but not great on D.

Is a bad free throw shooter and turns the ball over a lot.