A do-it-all forward who shows big time potential, thanks to his awesome athleticism and sweet shooting stroke. 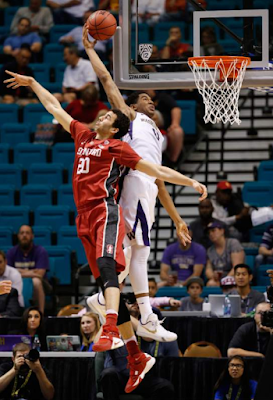 Pros
A very smooth offensive player who possesses high level athleticism and natural basketball instincts. Can really get off the ground and has a great first step. Is developing nice ball handling skills and is showing flashes of becoming a small forward, with dribble drives, nice dishes and nice form on his three point shot.

Has a fundamentally sound shot with really nice elevation. Very tough to defend in the mid range and hits a good percentage from three. Has some good shake-n-bake moves and can rise up quickly to bury a J.

Really excels in the open court and when attacking the rim. Has a lot of bounce and is a ferocious dunker. Gets his head above the rim effortlessly. Is well built with good strength and coordination.

Cons
Is not (yet) a good free throw shooter.

Still developing his understanding of the game – how to rotate defensively and how to keep the ball moving on offense.

Way too foul prone. Needs to do a better job of sliding his feet, not reaching and staying down on pump fakes.

Doesn’t have the bulk, strength and height to control the paint at the next level and is a below average rebounder.

Comparisons
Reminds of Markieff Morris with his smooth offensive game and stretch four potential, but has a lot more bounce than Morris. He’s got a little Blake Griffin in his game and some big dog Glenn Robinson too.