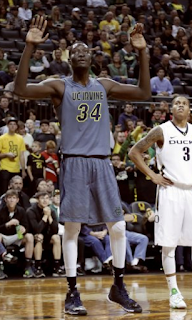 A massive young man who impacts the game, even if he’s not filling up the stat sheet. You can’t teach 7,6.

Pros
His size sets him apart and makes him a valuable rim protector. Just standing near the basket allows him to impact the game and make it difficult for opponents to score in the paint.

Has decent strength and knows his role as a rebounder, defender and intimidator.

Catches the ball well for a player his size and can score on put backs, lobs and dunks. Developing some post moves.

Cons
Slow. Doesn’t get up and down the court very well and could get lost in the speed of the NBA game.

A poor free throw shooter who becomes a liability at the end of games.

Projection: late first or second round pick in the 2017 NBA Draft