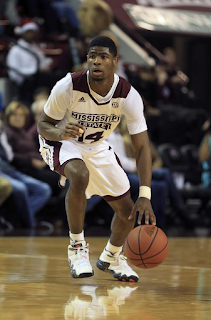 A talented scoring guard who is undersized but can fill it up against anyone.

Pros
Exceptional scorer with a deadly mid range game.  Has a quick first step and can get into the lane at will.

Has good upper body strength and finishes well over defenders, under defenders and after contact. Gets great elevation on his jumper and has become a deadly mid range shooter with improving three point accuracy.

Cons
Needs to know when to slow down and run the offense. Not a natural point guard and looks destined to be a scorer, more than a distributor. Doesn’t have great leaping ability and doesn’t do much above the rim.

Doesn’t have a pure stroke. The ball comes off his hand a little funky, which could hurt his consistency from outside.

An average defender who needs to put in better effort on that side of the ball.

Comparisons
Has a skill set and scoring mentality similar to Dion Waiters (although not as strong/big as Dion).

Projection: late first to second round pick in the 2017 NBA Draft