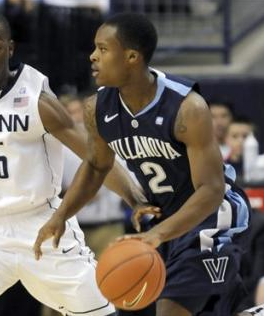 Has declared for the 2012 Draft after his Junior year.

Steady veteran point guard who knows how to control the flow of the game and get his team into position. Solid passer with good court vision – but was asked to score a lot at Nova. Feisty defender with quick hands and feet. Smart player who gets into proper position on D. Good leadership qualities.

Strong bodied with good lateral quickness, good balance and enough strength to absorb contract and finish in the lane. Quick with the dribble and can get into the lane against most defenders.  Draws a lot of fouls and is an elite free throw shooter.

Doesn’t shoot a high percentage from the field and is not a consistent threat from three point land. Was forced to take a lot of difficult shots at Villanova but could have made better decisions and had better shot selection. Good but not great athlete who is not a high riser or above the rim player. His effectiveness will be limited if he doesn’t develop his three point shot.

Projection: Late first or early second round pick in the 2012 NBA Draft