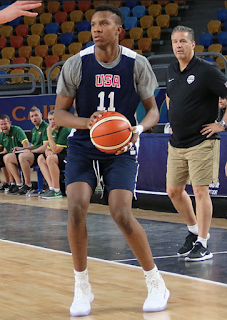 Overview
King is a big time talent who projects as a possible one and done player. He has ideal size for the SF position at 6-8, with a solid frame and good length. He’s an offensive talent who is nearly impossible to guard one on one.

Strengths
King has an NBA build and an NBA game. He can score from all three levels and is showing rapid improvement, leading to a move up draft boards.

His jump shot is smooth and consistent and he hits with accuracy from outside. He does a really nice job with the jab step, creating space for his jumper and can also hit off the dribble with a nice step back J.

King shows great body control and patience on his drives to the basket and can absolutely explode off the floor and finish with force at the rim. He’s a constant threat on back door lobs and put-back slams.

Physically, King is a rock solid athlete who carries a lot of strength, without giving up any quickness. Unlike a lot of young players who lack strength and bulk, King is well built, with good definition and a solid frame.

Weaknesses
King is still refining his game, especially his mid range and back to the basket scoring. Needs to learn when to pull up for a J instead of always taking it to the rim.

Comparisons
Built like Jeff Green but projects as a better player. Has some Rudy Gay and Caron Butler in his game.

Is he underrated or overrated? Who are your comparisons for him?
Tweet to @NBAdraftRoom