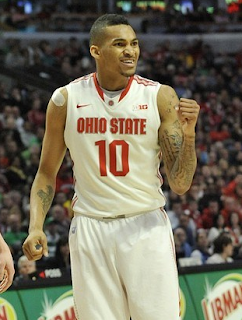 Terrific three point shooter and all around scorer who plays an efficient game.

Pros
Great shooter who can get hot from outside. Shoots a high percentage from the field, from three and from the line. Has great length and is hard to block. His shooting should lead to a long career of knocking down corner threes in the NBA.

Deceptively quick into the lane and is developing a nice dribble drive.

Cons
Still a bit one dimensional as an outside shooter and needs to improve his ability to get to the rim.

Lacks lateral quickness and can get beat off the dribble on defense.

Projection: early second round pick in the 2014 NBA Draft