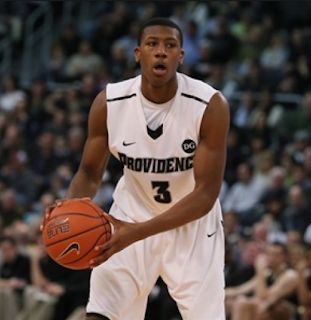 High flying point guard who can really get to the rim and has high level defensive ability.

Pros
One of the better athletes at the point guard position in college ball. Has nice hops and a lightening quick first step. Can really play above the rim.

Can get hot from downtown and has the ability to score in bunches.

An excellent passer who plays with his head up and can find teammates with either hand.

Is well built for the NBA game, with good length, strength and high level athleticism.

A standout on D who really locks up his man and uses his physical tools well. Has the quickness, length and strength to guard multiple positions.

Cons
Is not the most pure point guard and can look for his shot too often. Needs to get better at facilitating and playing within the flow of the offense.

Is not an efficient three point shooter and is a below average free throw shooter. Doesn’t have great form on his jumper and looks a little off balance when he shoots from outside.

Turns the ball over way too much and forces the issue on the offensive end.

Needs to stay healthy and but past injuries behind him.

Comparisons
Reminds me of a taller Eric Bledsoe due to his athletic and aggressive game. Has some John Wall in his game.