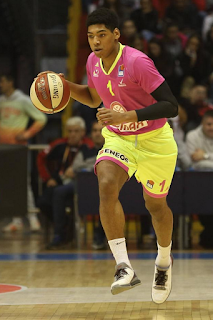 A high level defender and all around player with an NBA body, Mushidi is a combo guard who plays with great intensity, leadership and exceptional basketball I.Q.

Strengths
A big, strong athlete with a solid frame, Mushidi is an old school wing who can defend, mix it up in the paint and keep defenses honest with his outside shooting. A heart and hustle player who projects as a defensive stopper and all around glue guy at the NBA level.

His awareness on defense sets him apart from other prospects. He reads the play before it happens and always seems to be in the right spot. Excels at guarding one on one and is an excellent help defender.

Mushidi is a very heady player and this shows with his passing ability and his ability to run an offense. He creates space with the dribble and manipulates the defense with ball fakes and misdirection plays.

Is becoming a knock down shooter and has a really concise, quick release and good shooting form.

Has really good handles for a young guard and can bring the ball up against pressure and keep the dribble alive like a good PG. Uses his big, strong frame well to shield off defenders and knows how to get his shot off against taller players by using his lower body to create space.

Weaknesses
Isn’t a big time leaper and is more of a below the rim player.

Needs to be more efficient shooting the ball and hit a higher percentage from the field and from the free throw line.

Can force the issue on offense and settles for outside shots too often.

Comparisons
Reminds of Malcolm Brogdon. If Andre Miller was built like P.J. Tucker…

Projection: second round pick in the 2019 NBA Draft