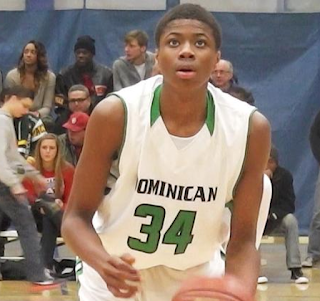 Overview
The little freak, Giannis’ younger (but not youngest) brother has awesome physical tools and big time upside but is raw and unpolished. He is still an unknown and although he has big upside, he could take a while to develop.

Strengths
Kostas has exceptional length, standing 6-10 with a reported 7-2 wingspan. He makes it look easy to get above the rim and can dunk the ball off euro-steps with ease. His physical profile is very similar to his older brother and, like Giannis, he has a chance to develop into a big time player.

For a young player of his size he has really good ball handling ability and he should continue to grow into a point-forward type (although he doesn’t seem to have the same court vision as his brother at this stage).

His ability in the open floor, both running the break and filling the lane, makes him a dangerous transition player. He covers a ton of ground with his long strides and can cover ground on spin moves and euro steps in a way that reminds of Giannis. He plays above the rim with ease thanks to his elite length and athleticism.

Three point shooting isn’t a strength at this point but his shot isn’t broken and he shows some promise as a shooter.

On defense he’s got a chance to be really good due to his length, agility and overall quickness. He has quick feet and quick hands, allowing him to guard much smaller players and use his great length to his advantage. His perimeter defense sets him apart from other 6-10 prospects and is an area in which he has elite potential.

He can be a force as a weak-side shot blocker who surprises opponents with his quick leaping and length.

Weaknesses
Kostas is very raw and still developing his basketball skills. A lot of his hype is about the promise of what he might become and visions of another Giannis. He’s got a lot to prove and a lot of development to go before he reaches close to that level.

He is still very skinny and needs to gain a lot of strength and weight. Can he stay healthy and stay on the court?

He can try to do too much with the dribble and can play wild.

Comparisons
Physically he reminds of his brother Giannis but it’s hard to imagine he’ll reach the same skill level. His floor is Perry Jones III.

Projection: possible second round pick in the 2018 NBA Draft