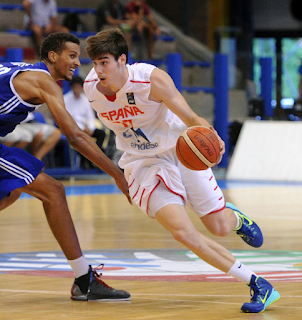 Combo forward who can really stroke it from outside and is fundamentally sound. Highly skilled but doesn’t have the highest ceiling.

Pros
A tough competitor with a really nice jumper Hernangomez plays a well rounded game, contributing on both ends of the floor but what makes him an exciting NBA prospect is his scoring ability.

He’s got great form on his jumper and all the makings of an excellent 3 point shooter at the NBA level. Hit with consistency from 3 and from mid range and has a knack for finding his shot.

Has sneaky quickness and a lot of moves to free himself in the lane. Excellent in the pick-n-roll.

Plays with good intensity, passion and excellent decision making. A team first player. Understands team defense, floor spacing and how to put himself and his teammates in right position.

Cons
Doesn’t have the size to bang down low at the NBA level and doesn’t have an advanced post up game.

Isn’t a bad athlete but doesn’t have the blazing speed and elite leaping ability like many NBA players. Can he guard NBA wings?

Needs to improve his passing, especially off the dribble.

Projection: mid first to early second round pick in the 2016 NBA Draft.