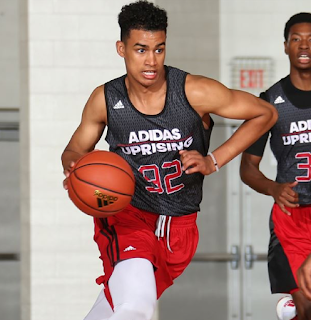 One of the best shooters to come along in years. Tucker has a silky smooth stroke with great accuracy.

Pros
Tucker is a constant threat to drill one from deep. His release is picture perfect and super smooth.

He hunts his shot on the perimeter and knows how to find space. He makes up for a lack of speed by having good shiftiness and a natural feel for the game. His decision making, shot selection and ball movement skills are top notch and he seems to be a student of the game.

Uses screens well and has a quick release, which should get even quicker as he continues to refine his skills. Has range out to NBA three and projects as a very high level three point shooter at the next level.

He’s got a lot of strength and can hold his own in the paint.

Cons
He’s a low center of gravity player who doesn’t get a lot of lift off the ground. His lack of leaping ability hinders his inside game and his ability to get rebounds and finish in the lane.

Could struggle to find his shot against NBA level quickness.