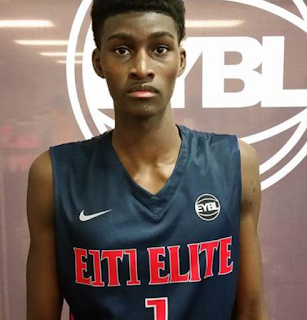 A very long and skilled forward who can light it up from outside.

Pros
Has a ton of versatility and an advanced perimeter game. Is a match-up nightmare who can stretch the D and score off the dribble drive. His length sets him apart from other wing prospects.

Has ideal form on his jumper and gets into his shot with great rhythm. Shoots it well off the dribble and uses his length well to break down defenders and get them off balance with crossovers and hesitation dribbles. His ability to hit the outside shot opens up the dribble drive.

Has really good handles for a 6-10 player and can play as a point-forward in transition.

Has elevated his level of intensity and shows great awareness on the defensive end. Has natural defensive instincts – reminds me of a taller Patrick McCaw the way he reads the play and knows how to play the passing lanes.

Cons
Needs to add strength so he can do a better job of defending in the lane and finishing against length. Is much more of a wing defender than a rim protector and can get pushed around the paint.

Could be a boom or bust type player and there’s a chance that the hype gets ahead of the talent. Could be an All Star player but not a transcendent talent like KD.

Comparisons
You hear the Kevin Durant comparison thrown around, that’s tough to live up to, but he’s in that Durant and Brandon Ingram mold.